International Workshop “The cultural and academic relations between the Eastern bloc countries and the West during the Cold War period” (November 15th, 2019) 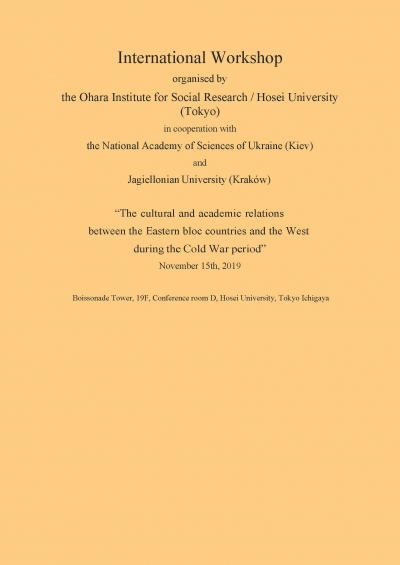 The peaceful revolution in Eastern Europe that began in 1989 resulted in the dissolution of the Socialist Eastern Bloc, long separated from the Western world by the Iron Curtain. Democracy and liberalism took the place of the socialist regimes that had ruled for almost 40 years since the end of the Second World War. Many countries, such as Ukraine and the Baltic States, achieved their independence when the Soviet Union ceased to exist.

This year is the 30th anniversary of the end of the Cold War. The world was divided into socialist and non-socialist camps under the two superpowers, the Soviet Union and the United States, for nearly 40 years until this historic break. In this regard, this project  focuses primarily on examining the development of cultural and academic relations between the Eastern Bloc countries and the Western world from a historical and transnational perspective.

In the Cold War period, there was obvious cultural and scientific contact between the two camps, although the two societies were ideologically built on completely different foundations. Thus, a question arises concerning whether cultural and academic contact with a non-socialist society, such as Japan, Europe and the US, have aroused the hope of Western liberalism and democracy, especially of the citizens of the Eastern bloc, particularly in view of the ensuing peaceful revolution in Eastern Europe. What significance did a cultural and academic exchange with socialist countries have for Western citizens? What have the causes and consequences of these cultural connections that have developed beyond the Iron Curtain been between the different systems?

In the workshop, historians from Japan, Ukraine, Poland and Germany will work together and try to investigate the problem from an international perspective. A transcultural and multi- faceted discussion is expected.

The project is being funded under the Research Fund "Ohara Institute for Social Research, Hosei University" for 2019.

The cultural and scientific relations between the Soviet Union and Japan

The academic cooperation between Tokyo and Moscow; a review

The cultural policy of the Soviet Union and the Ukrainian question

Polish–German musical relations during the Cold War era. The role of politics and personal contacts.

Relations between the USSR and the West: A historical retrospective